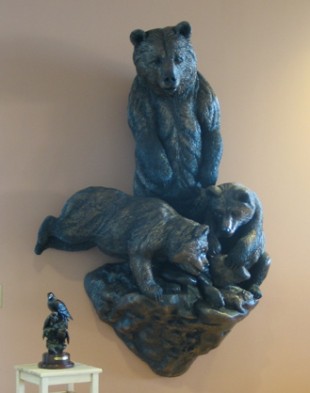 The new Alberta Children’s Hospital opened in Calgary, Alberta in September of 2006.  It has since become a cutting edge research and care facility which serves the needs of children throughout the provence and beyond.   The many artworks found inside the facility were considered to be important from the hospital’s inception and were carefully planned.  The four life-size  sculptures at the Alberta Children’s Hospital by Carole Danyluk and Rick Taylor depict wildlife “family ” themes. They are,  “Play” (bison calves) located in the east of the building or the “Admissions Area ” of the Hospital, “Fly” (bald eagles, located at the entrance to the south wing),  “Discover”  (sow grizzly with two cubs and a rabbit) at the west wing entrance and “Sing” (coyote and three pups) marks the north wing.  The sculptures are of a soft and gentle nature and help to create feelings of comfort and safely for visitors while in a challenging and sometimes emotional environment.  This gift was made possible to the Alberta Children’s Hospital by the generosity and committment of of the Robert G. Brawn family who saw the role of the environment in the healing process.

The group of sculptures loosely follow aboriginal thought regarding the four cardinal points of the compass and how they relate to human beings.  Starting in the east, the position of the rising sun and the direction of new beginnings we have the most important animal in aborigal lore, the bison.  Followed by the south, the direction of high noon and maturity.  South is symbolised by the eagle.  After maturity comes the direction of rest and recovery symbolized by the west.  West is the direction of the setting sun, slowing down and hibernation as is exhibited by by the grizzly bear.  And, finally the north, the direction of the supernatural, of miracles and of enlightenment.  The energy of the north is embodied in the spirit of the canine or “coyote”.  Individually, these four life-size monuments greet the patients and families as they enter the north, south, east and west wings of the hospital.  Collectively they represent growth. 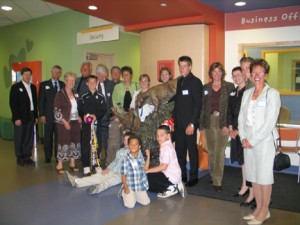 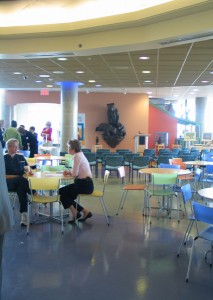 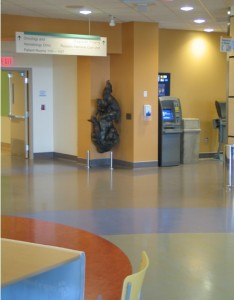 "Sing" (Coyotes) mark the North Wing in the central lobby. 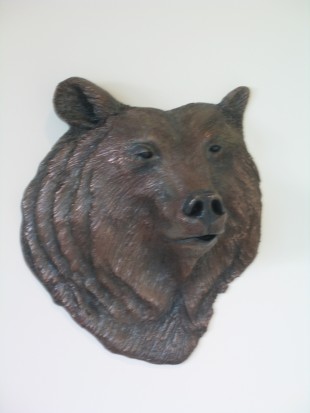 In order for visitors to the Alberta Children’s Hospital to easily navigate the halls of the facility this series of four  “way finding” plaques were called into service.  The animal motifs, bison, eagle, bear and coyote are a continuation of the theme embodied by the sculptures in the central lobby of the hospital. This theme, loosly borrowed from aboriginal lore, assigns an animal totem to each of the cardinal points.  The north is represented by the  coyote, the east by the bison, the south by the eagle and the west by the grizzly bear.  One need only follow the appropriate animal totem, affixed to the wall, to find ones way amoung the wings of the facility. 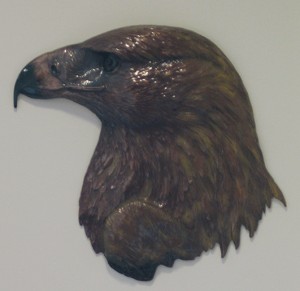 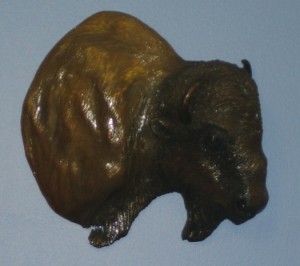 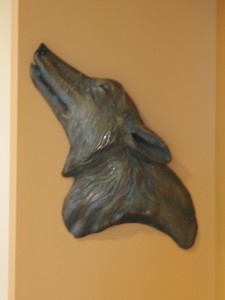 “High up in the Arctic” (World Record Arctic Island Caribou). By Rick Taylor 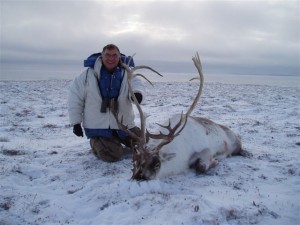 The artist in Nunavut with his world record Arctic Island Caribou in 2009.

Marking many Arctic ridge tops are human made stone figures called “inukshuks”.  They are way-finding symbols for native people and historically were used to drive caribou along certain routes. This caribou uses the inukshuk as a convenient scratching post.  “High up in the Arctic” is a piece that is very personal to Rick. In 2009, on a hunt in Nunavut Territory, Canada, he was lucky enough to harvest a beautiful Arctic Island Caribou bull that officially scores 416 SCI points to become the new world record.  At the 2010 SCI convention in Reno the rack was panel scored and beat the old record by 29 points.  And to honor the event, the caribou bull depicted in the bronze “High up in the Arctic”  bears a replica of the set of antlers of Rick’s new world record  trophy.  Each piece, in the limited edition bronze series, entitled “High up in the Arctic”, will unofficially be marked as one of forty-eight as befitting a new world record.   It will also have an official foundry serial number.  This sculpture is 18 inches long and 15″ tall. It is mounted on fine walnut wood.  $8500 CDN includes shipping in US and Canada. 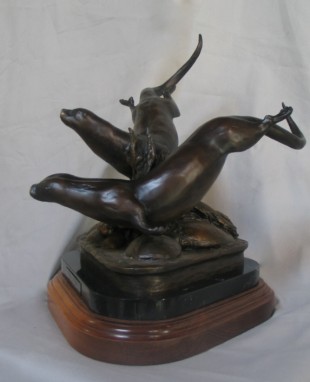 “Twin Otters” is a limited edition bronze sculpture of two young river otters in their river environment. These twins are still more interested in playing than earning a living.  This sculpture is 13.5 inches tall and is mounted on black marble and fine walnut wood.  It is a limited edition of 36 of which there is only one casting remaining for sale on the primary market.   This sculpture has the serial number, #1/36.  $27oo. includes shipping is US and Canada 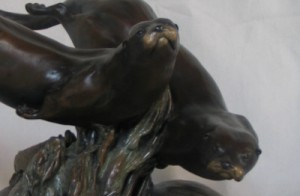 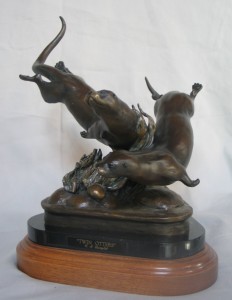