“Crossing the Cassiar” by Rick Taylor 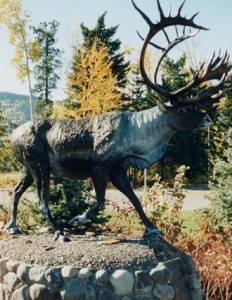 After installing the mountain goat monument called “High in the Northwest” in Smithers, BC, Canada, the town council was very pleased with the public reaction.  When the retail chain of Canadian Tire proposed to build a store on their 5 acre site on the southern end of the town, and wanted to work with the council on a public art project, they immediately decided on a companion wildlife bronze.  The Cassiar region is also famous as producing the world record mountain caribou. This iconic animal is portrayed trekking across  the high tundra. “Crossing the Cassiar” was erected in Smithers BC,  in 2001.  The life-size caribou is cast bronze on a stone base.  By Rick Taylor. 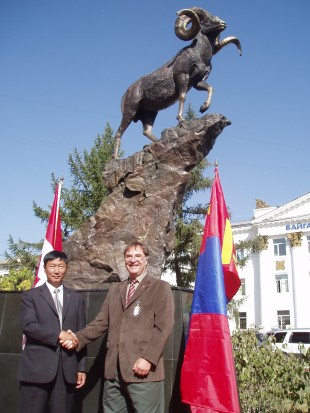 “King of the Altai”, Ullaanbaatar, Mongolia. 2006. Rick Taylor and sponsors place monument as a tribute to the future of Mongolia. 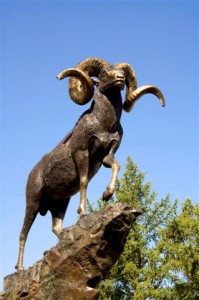 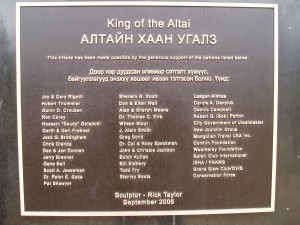 Sponsor plaque at "King of the Altai" monument site. Thank you sponsors! 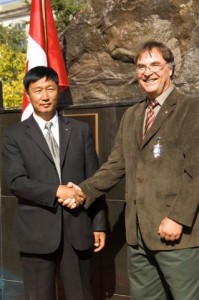 Rick Taylor receives the Silver Star of Freedom from Mongolian dignitaries for his contribution to the Mongolian people.

The future of Mongolia. 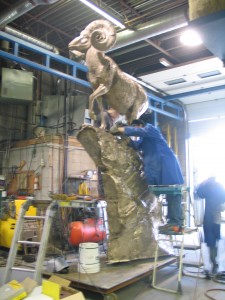 The making of "High in the Altai" in Calgary, Alberta.

With of the success of the North American Wild Sheep monument program, Rick Taylor monuments garnered international attention.  The Mongolian ambassador to Canada contacted Rick in British Columbia and traveled from Ottawa to Kaslo to discuss a project to create a bronze monument of the mighty High Altai Argali.  Knowing that Rick had already traveled twice to Mongolia , and was familiar with Ulanbataar , the ambassador suggested another trip to find a suitable location and do some field research.  On that trip it was decided that the park in front of the Natural History Museum would be ideal and Rick returned home to make the maquette in one- third scale.  At that years hunters’ conventions he found twenty five sponsors who’s purchase of the smaller maquette funded the making of the monument.  The next year, the monument was shipped by container to Mongolia, through China and in September of 2006, Rick and his crew returned for a fourth time to Ulanbataar   for the installation.  During the dedication of the bronze monument Rick was awarded the Presidential Silver Star of Freedom by mayor of the city, a huge honor indeed.  The event was covered by the local television channel and caused much excitement as many city dwellers had never heard of the mighty Argali sheep or the role that sportsman play in the protection of their national treasure.